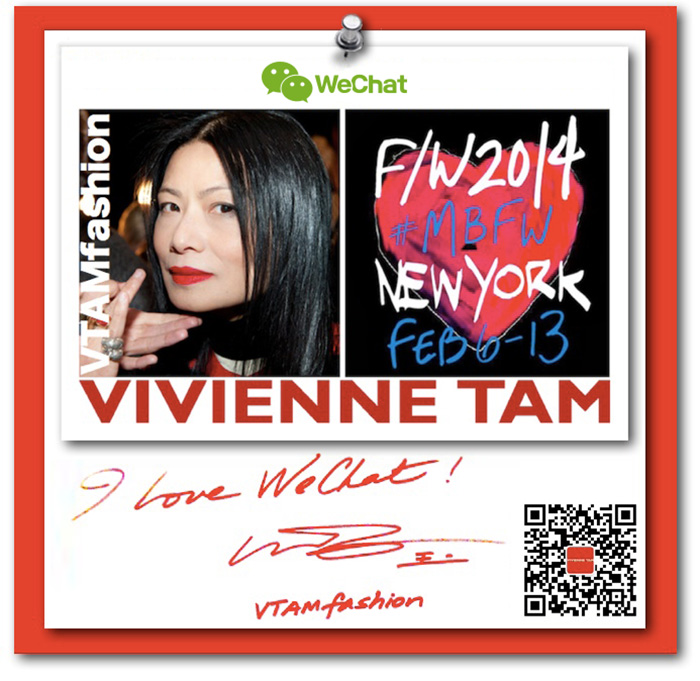 If you don’t know about WeChat now you do! Vivienne Tam is always at the forefront of technology and fashion integrations, she just announced her partnership with WeChat for Mercedes Benz Fashion Week Fall 2014. WeChat is the world’s fastest growing and innovative social communications app with over 100 million registered users internationally, I’ve been a using the app since last year- it’s a super popular in China.

At Vivienne Tam’s Fall 2014 runway show, guests who download the free WeChat app and add VTAMFASHION as a contact, will be privy to exclusive updates, can participate in a real-time group chat during the show and have access to other exciting opportunities.

To celebrate the partnership, Tam has designed four sets of customizable chat wallpapers that WeChat users can choose from to decorate and accessorize any of their chat conversations, as well as a limited edition iPhone 5/5S case inspired by her Fall 2014 collection, which will be gifted to guests at the upcoming show on February 9th at Lincoln Center, which will be live streamed at newyork.mbfashionweek.com/live. Those not at the show also can participate by downloading WeChat and adding VTAMFASHION as a contact, to receive behind-the-scenes photos and audio messages from Vivienne Tam herself as well as close ups of the collection.