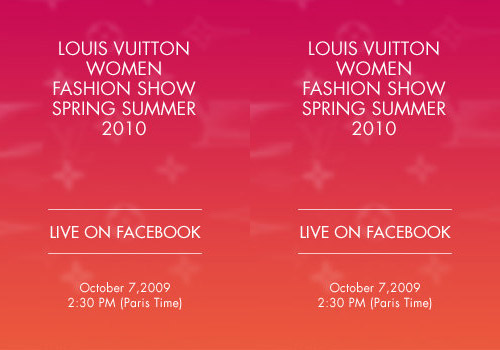 We’ve all just got a front row seat to Louis Vuitton‘s Women’s Spring/Summer 2010 fashion show which is broadcasting live on Facebook on October 7, 2009 at 2:30pm Paris time, which is 8:30am New York time. Louis Vuitton created an official Facebook fan page, “The Art of Travel By Louis Vuitton” which aims to become the official online destination for everything regarding Louis Vuitton. The fan page attracted more than 600,000 international fans in less than two months. Today, Louis Vuitton is going one step further and confirming its digital intentions as the first luxury brand to offer a live broadcast of its Women’s Spring/Summer 2010 Ready to Wear show exclusively on Facebook.

On October 7, 2009 at 2:30pm Paris time (8:30am New York time), current and future fans of the Louis Vuitton Facebook page will be able to watch the latest Marc Jacobs creations for Louis Vuitton streamed live from Paris Fashion Week. Viewers will also be given the opportunity to comment on the event live from their Facebook status. Following the event, the video of the show will be available on demand exclusively on the fan page for 24 hours. If you’re not a friend of “Louis Vuitton” already, be sure to add them and tune in.