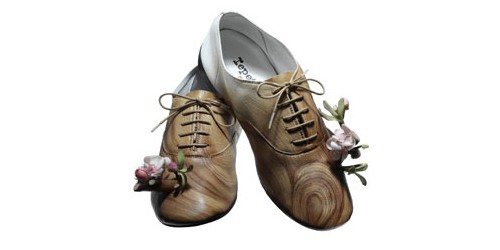 The Repetto Foundation’s Dance For Life (Danse Pour la Vie) partnership with UNESCO has tapped Moschino to design a pair of their Zizi shoes that resembles wood in soft leather. On the shoe is a cotton peach blossom with a canvas silk leaf adorned on the sides which according to Vogue UK dates “back to the Fifties and salvaged from an old florist in Milan, the quirky design is one of several Repetto products customised by designers to celebrate the French shoe company’s birthday, and raise money to support educational projects that involve dance. Actresses Catherine Deneuve and Charlotte Gainsbourg as well as designer Jean Paul Gaultier are among those also taking part. The items they customize will be exhibited in major cities across the world before being auctioned in October.”