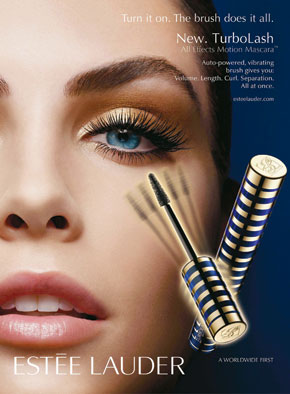 Estée Lauder is set to release a new “battery-operated, vibrating, all-effects mascara”, TurboLash All Effects Motion Mascara on July 17th. The mascara retails for $30 and will be sold sold exclusively at Saks Fifth Avenue until December then rolled out to stores. George Kress, VP of Corporate Package Innovation was inspired back in spring ’04 “during a trip to a big-box retailer when his eye was caught by a vibrating men’s razor”. How does it work? The vibration is at “125 micropulses per second — powered by a tiny battery in the mascara cap, which begins to vibrate as soon as the user unclicks the tube — would offer the best results”. The formula itself is a “rapid-release gel formula composed of jellied water, olive oil and paraffin waxes, which nearly liquefies for application and immediately solidifies upon contact with the lashes. The remainder of the formula is a blend of micas, microspheres, kaolin clays and cellulose gums”. via WWD
It gets too technical but since I’m a fan of mascaras, I am definitely looking forward to trying this. I’m not sure how well I’ll do with a “vibrating” wand since I get pretty messy with the traditional wants already. Hmmm…any thoughts? Would you try this?