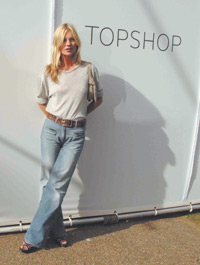 Topshop today will unveil a long-term agreement with the supermodel under which she will help create and design an exclusive collection for the British fast-fashion retailer. The collection, Kate Moss for Topshop, will debut at the company’s 308 stores and on its Web site in spring 2007.

WOW, I can’t wait to see whats her line like. Full Story after the jump…

“We want to build this into a global brand,” Sir Philip Green, owner of Topshop’s parent, Arcadia Group plc, told WWD in an interview. “She is a fashion icon in terms of the U.K., probably the best-known model, and is what Topshop is all about in terms of fashion. Our customers identify with her.”

Moss said in a statement, “I have always been a big fan of Topshop and regularly shop there. I love what they stand for and am very excited at the thought of working with them. It’s going to be great fun.”

Terms of the agreement were not disclosed. Green said only that it is a long-term deal, joking, “or at least until Sunday, anyway.”

He declined to reveal any sales targets, but did not demur at suggestions that revenues eventually could be several hundred million dollars. That would place the Kate Moss for Topshop collection in the same league as other celebrity fashion lines such as Jennifer Lopez’s Sweetface Fashion Co., which has sales of apparel, accessories and fragrances of about $200 million annually, and the new L.A.M.B. label by Gwen Stefani, which is aiming for sales of $90 million in its first year.

“If we do this right, then it should be a successful global brand,” Green said. “We will put real energy behind it on both sides. In fact, Kate’s first day in the office will be Thursday. She already joked about where her office will be.”

The Topshop deal is yet another sign that the scandal last year over Moss’ alleged use of cocaine has not damaged her status as a model or fashion trendsetter. After some brands dropped her from their campaigns last year because of the furor, Moss has returned stronger than ever this fall. She is featured in at least 14 fashion ad campaigns, including those of Agent Provocateur lingerie, Louis Vuitton, Bulgari, David Yurman, Calvin Klein jeans, Christian Dior accessories, Burberry, Versace and Longchamp.

Green acknowledged the potential dangers of signing a celebrity like Moss, but added, “From my point of view, people make mistakes and they shouldn’t be penalized for that for the rest of their lives. She is sufficiently talented and commercially sensible to make this work. She recognizes this is high profile for both of us.”

Green personally negotiated the deal after he said he met Moss and she told him, “I think we should do something together.”

As the discussions continued, Green said neither he nor Moss wanted for her simply to be the face of Topshop.

“She told me what she likes about Topshop, and that she’s always shopped there,” he explained. “It’s her market, appeals to her, and what she wears and represents in terms of fashion is what we’re trying to do with the brand to position it in a slightly different place. She knows fashion, and said what she wanted to do was to put more of her ideas into the business because she knows what people like to wear. She believes she can bring value to Topshop if she works with our designers to create a collection.”

Moss will appear in only the occasional ad for the brand, stressed Green, adding that most campaigns will feature other models. Her main role will be to give advice on what the collection should look like and what trends should be included.

“She will come in for a few hours every other day or so, set the inspiration for the line, and then our designers will interpret that,” Green said. “She knows what the trends are, she likes shopping and she will provide the ethos as to where we should position the line. She will be in the engine room helping to steer the collection.”

Kate Moss for Topshop will cover a variety of categories, including ready-to-wear, accessories and footwear, Green said.

Prices have not been decided, nor has where the collection will fit price-wise with other Topshop lines.

That’s particularly true for Topshop, one of the U.K.’s most successful retailers. The company has become extremely active in fostering new collections and fashion initiatives in the U.K., including sponsoring the New Generation group of designers showing at London Fashion Week for the last 10 seasons. Many of those collections are carried at Topshop under the Unique label. Green is funding a fashion academy here to train retail and fashion executives. It will be formally opened this fall.

Topshop is eager to expand internationally, including in the U.S. Green initially wanted to have a flagship in New York by spring 2007, but a lawsuit over rights to the Topshop brand in America delayed that plan. After settling the suit last month, the billionaire retail mogul has renewed his search for a flagship site in the U.S.

Green said he may consider opening corners in department stores in the U.S., particularly with the Kate Moss for Topshop collection. Meanwhile, Topshop is working on a new Web site that will enable global e-commerce. The revamped site should be completed in time for the launch of the Kate Moss line.

“At the end of the day, the product has to do the talking,” Green said of the collaboration with Moss. “I saw Bono in the airport the other day and he said, ‘Philip, I should have listened to you. Selling clothes is a nightmare.’ I said, ‘I don’t try to play the drums or sing because I know they aren’t easy. Same with selling clothes.’ At the end of the day, the customer has to love the product. That’s the only way it will work.”